Five Things I Learned From My Character 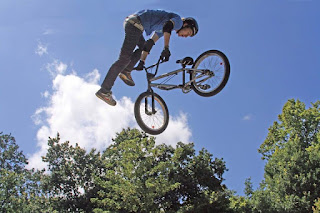 I anxiously await a release date for my YA novel, Too Be Honest. In between biting my nails and crossing my fingers that I'll learn the date soon, I decided to reflect on some interesting things I found out from my characters while writing the story. The hero, Chase, is an avid BMX rider. I had to do some research on this topic since I hadn't a clue what it entailed. I've listed five cool things I found out.

1. BMX racing and freestyle is a worldwide sport.


2. It was founded in the 1970s and began with children in California racing their bikes on a dirt track.


4. There were too many freestyle air tricks to list so I'll tell you about a couple that caught my attention. The Superman-the rider removes his feet and extends them behind him to resemble Superman in the air. Decade-the rider holds onto the handle bars and throws himself or herself(girls compete too) around the bicycle then lands on the pedals.


I've developed a great respect for this sport after doing my research. These riders have to put in a lot of hard work and practice. I'm sure talent plays into it also. Chase taught me a lot about this sport! Next post I'll talk about what I learned from my heroin, Starla.

Email ThisBlogThis!Share to TwitterShare to FacebookShare to Pinterest
ya fiction, contemporary BMX, freestyle, YA Fiction, YA lit