Taking A Chance on Love

TAKING A CHANCE ON LOVE 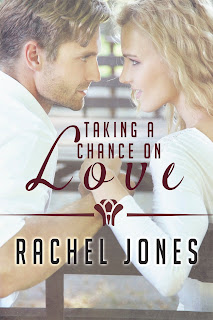 TAGLINE:  A touchdown for the coach when the music teacher accepts his love

BLURB:
From childhood, Virginia Manning has planned for a career as a concert clarinetist. Blindsided by family circumstances, her plans are interrupted, taking her down a path she would never have chosen. As a music teacher, Virginia’s relationship with the football coach goes from problematic to romantic. After Blake’s brush with death, a scared Virginia runs away looking for the contentment music has always brought to her life.
Because Blake Oliver has experienced disappointment and pain, he opts for a fresh start in a small New England town. Accepting the position of football coach, he isn’t looking for love when it finds him. But when Virginia leaves to pursue a performance career, Blake realizes it’s not where you live but having someone to love that matters. His only problem is making her understand that as well.
EXCERPT:
She pulled her arms across her chest in an attempt to calm her shivering. Bright lights reflected from her rearview mirror, the only headlights she had seen since she had stopped on the side of the ride. Releasing a sigh of relief, she waited for flashing blue lights to interrupt the blackness surrounding the car. No blue lights. Her heart began racing at hearing a car door slam. She was alone, on a deserted highway. Checking the locks on her doors, she thought about driving away, but how far could she go with a flat tire?
A tap on the passenger window made her jump. “Hey.”
The dark night made it impossible to see the face outside the passenger window. Fear made it impossible to move.
“Come on, Gin. It’s wet out here.”
No one else called her Gin. She hit the automatic button releasing the lock and Blake pulled the door open. Relief flooded her body and was replaced by anger.
“Blake — you nearly scared me to death.”
“Not the best time for a flat tire. You’re soaked.”
“You’re not so very dry yourself.”
“Where are you headed?”
“I was on my way home. I had an early dinner with my family before they left for the weekend. Staying to play my piano wasn’t a bad idea — I just got caught up in my music.” She loved how her music could take her away from everything, but the downside was eventually she had to come back to reality. “Anyway, I was going through my options when you drove up.”
“Your spare is lying in the mud.”
“I was going to try changing it, but when the lightning started, I chickened out.”
“Well, you can’t drive all the way to Boston soaked to the skin. And I really don’t want to change a tire in this downpour.”
“So what do you suggest I do?”
“Let me take you back to your sister’s house. You can stay the night and deal with the tire in the morning.”
Virginia didn’t respond, didn’t want this moment to end. He was here, beside her and the intensity of how much she had missed him came crashing down upon her like tumultuous waves hitting a jagged rock wall along the seashore.
“Gin?”
She looked up. “That sounds good.”
As he leaned over and pulled the keys from the ignition, it took all Virginia’s willpower to keep from pulling him close. 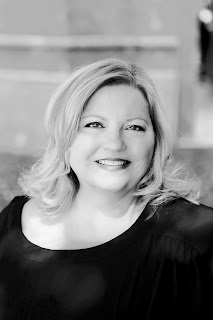 It was thoughts of what she would do after retirement from a twenty-eight-year career in healthcare that spurred Rachel to begin writing her first manuscript in March of 2012. Needing guidance and support with her new endeavor, she joined local and national writing groups.
Rachel signed her first contract in 2013 and her debut novel, To Dance One More Day was released in June of 2014. She is eagerly awaiting retirement to write full time.
A music enthusiast for decades, Rachel resides in Kennesaw, Georgia with her husband of thirty-seven years and a spoiled Labrador retriever. She is a member of Georgia Writers Association, Georgia Romance Writers and is a PRO member of Romance Writers of America.