It is my pleasure to host fellow Clean Reads author Karen King on my blog today. This talented author's new young adult novel Witch Angel is released today. Just in time for Halloween! 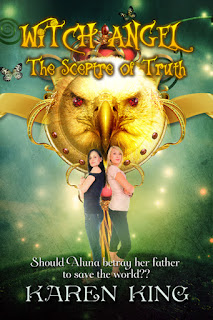 Should Aluna betray her father to save the world?

Blurb
Aluna’s father is the Master Wizard of the Katalan. On her thirteenth birthday she is initiated into the coven and swears allegiance to her clan. Then she has a vision about the mother she has never known and a gold sceptre with an eagle’s head handle.

She discovers that the mysterious new girl, Raffie, who appeared out of nowhere is looking for the same sceptre. Aluna hopes the sceptre will lead her to her mother so swears an oath of friendship with Raffie, pledging to find it together only to discover that Raffie is Angleyt. They are sworn enemies.

Aluna’s father is looking for the sceptre too, as are the evil Bygnorim.  Will Aluna really betray her father? What dreadful secret is he hiding about her mother? Aluna and Raffie face terrible danger in their quest. Are their combined powers strong enough or will Darke Magyck win?

Extract
Something caught her eye. A sphere of brilliant light was shooting down through the sky. She stared at it, butterflies of excitement fluttering in her stomach. It must be a shooting star. She could make a wish. Jumbled thoughts of the things she could wish for raced across her mind, but only one stood out. It always did. “I wish I could find my mother,” she whispered.
The glowing star continued plunging, plummeting down towards the bushes just ahead of her. It wasn’t a shooting star. It was a falling star! Aluna ran towards the bushes, eager to get a glimpse of this wonder. What would a star look like? Would she be able to take it back and show the others?
The star disappeared behind the bushes. Panting now, Aluna raced towards it, her feet barely touching the ground beneath her. Thankfully, she had always been nimble-footed. Many a time she had crept softly behind Sariah, the housekeeper, and had made her almost jump out of her skin. Once, Sariah had been so shocked she’d dropped the pie she’d just taken out of the oven.
Be quick but quiet, she told herself as she ran. Could you scare a star?
She was at the bush. She could still see the light glowing behind it, so bright it dazzled her. Using her hands to shield her eyes from the glow she peered around the bush.
The light was fading. Aluna moved her hands from her eyes so she could see better and pushed her hood back. Where was the star? The light flickered, then a shape started to form in it. She watched, transfixed as the shape turned into a girl about Aluna’s age, slim with long hair tumbling over her shoulders. The girl stretched up her arms as if embracing the heavens. Aluna let out a gasp of astonishment and the girl spun around, her eyes widening with shock as they rested on Aluna.
For a moment they both stared at each other. The star girl’s eyes locked with Aluna’s, and a lightness filled her mind. It was as if the girl could read her mind, her soul. In a panic, Aluna tore her eyes away, grabbed her basket and fled, muttering the protection spell under her breath.

Author blurb
Karen King has had over one hundred and twenty children’s books published by mainstream publishers such as Walker, Scholastic, Harper Collins and Macmillan. She’s written for many children's magazines too including Sindy, Barbie, Winnie the Pooh and Thomas the Tank Engine. She writes for all ages and in all genres; story books, picture books, plays, joke books, non-fiction and YA.

Author F&Qs
How did you get started writing?
I've always written. I had my first poem published when I was 11. I started my writing career with Jackie magazine, writing articles and photo stories.

Are you most productive in the morning or evening?


Morning. Often I get out of bed and start writing straight away. I'm full of ideas in the morning.
Posted by Tammi Booth at 3:39 AM